So, about that waistcoat then. I decided quite a while ago that The Boy deserved some of my sewing time and energy, but it’s much harder to find tempting sewing patterns for men than it is for women. I had my eye on the Ryuichiro Shimazak book “Les Chemises” for a while, but nowhere I looked has had it in stock over the six or so months that I’ve been looking. Then I stumbled across Make My Pattern, an unselfish sewing project if ever there was one. Joost de Cock, in an attempt to make sewing your own clothes easier for men has an expanding range of men’s clothing patterns on his website for free! Of course, in this case it’s not a man he’s giving a helping hand to, but I (and hopefully my boyfriend) are extremely grateful nonetheless.

I gave myself a deadline on this project (birthdays are only provisional deadlines after all): I wanted him to be able to wear the waistcoat to a wedding on the Friday exactly one week after his birthday. Well, he did wear it to the wedding. I sewed the buttons on in the car on the way to the church – there’s nothing like leaving it until the eleventh hour.

To get a pattern from Make My Pattern, you have to put in the measurements of the person that the garment is for and out comes a pattern specifically for those measurements. The list of measurements to fill in is very long, but there’s a helpful guide for exactly how to take each measurement, and the garment that resulted really was very fitted to The Boy.

(Those darts look a bit more woman-shaped than man shaped… must work on my cutting and sewing accuracy!)

Even when you’ve put in the measurements and hit download, the website gives you a whole host of further styling options such as length, where you want the V to fall, how many buttons you want, and fit. There are 5 different fit options ranging from Skinny to Loose. I went for the second slimmest fit (called, appropriately, Slim) and I’m glad I didn’t go skinnier – I really don’t think he’d have been able to do up the buttons if I’d gone for the skinniest. As it’s not part of a three-piece suit I didn’t intend it to be worn closed anyway, so the close buttoned-up fit isn’t a problem. But he wouldn’t get a three-course meal under those buttons!

The shell of the waistcoat is made of a slightly coarse linen-and-something mix that’s been sitting in my stash for a while, and I lined it with some fairly fluid viscose. I left it hanging for a week or so before finishing the lining and shell hem, to let the lining stretch out as much as it wanted. The lining is still bagging towards the bottom a little bit more than I would like, it’s not noticeable when it’s being worn, but you can see it in this picture: 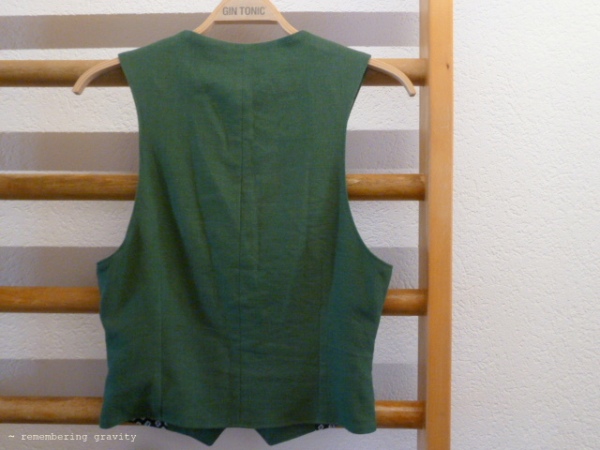 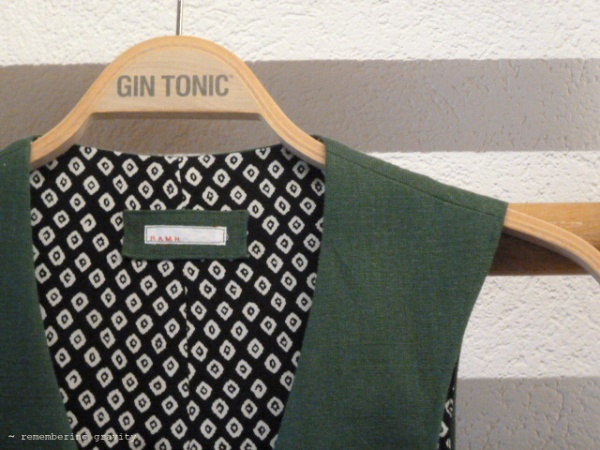 I had some trouble with the pocket construction. For a start they seem to be very low down on the waistcoat (although they don’t look so low-set on Joost’s example) and when I was sewing them together, the pocket lining and pocket bag didn’t match up length-wise at all. One part was some inches longer than the other. It was only the second time I’ve sewn welt pockets, so I might well have just completely misunderstood the instructions, and I just cut the longer part to match the shorter (and then cut both so that they weren’t hanging out of the waistcoat!) so it wasn’t a very major problem. 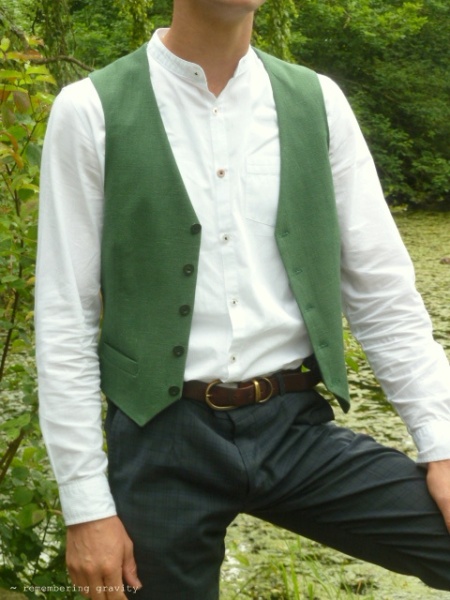 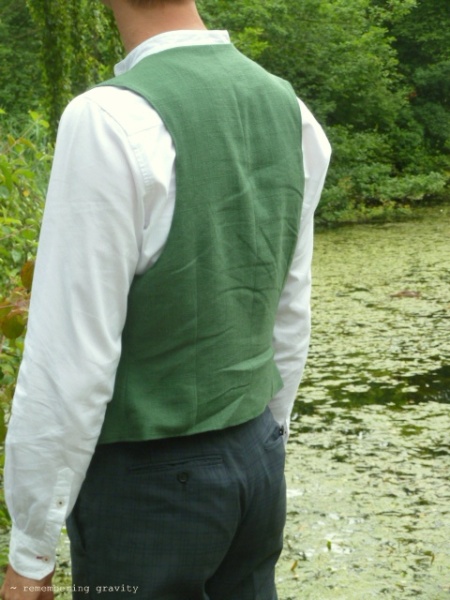 Well I’m not too traumatised by my first encounter with sewing men’s clothes, I’m still determined to make a nice shirt (there’s a pattern for one on MMP, I just have to brace myself for it, and sew a few things for myself first), and I’m looking forward to seeing Make My Pattern’s development.
Now for some simple sewing for myself. If I can bear to turn on the iron in my new top-floor flat, in this Swiss summer heat!