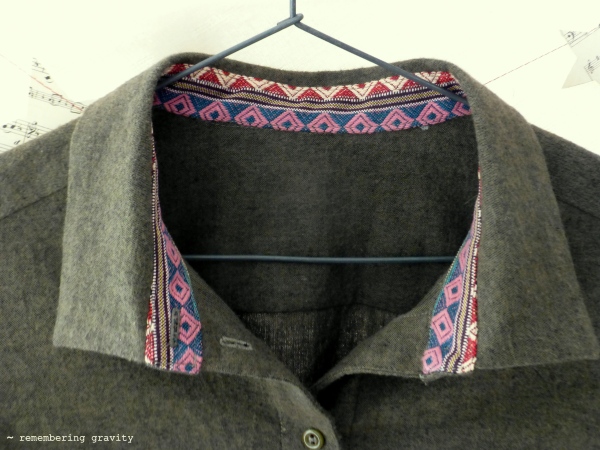 I bought this pattern in the Named advent calendar sale. I’ve had it in my sights for a while because although I love the Archer shirt pattern, the interesting cross-over collar, button placket and French cuffs mean that this shirt is just a little more dressy. And sometimes I want something a little bit smarter. END_OF_DOCUMENT_TOKEN_TO_BE_REPLACED

Back last year, if you remember, I made this jumper for my sister for Christmas, and then completely failed to get a picture of her wearing it. My best persuasions and threats were to no avail. But eventually we found ourselves in the same place at the same time. So I forced her into it, frogmarched her outside and pointed a camera at her. Now you  can actually see what it looks like in real life, being worn, rather than just lying on my floor. 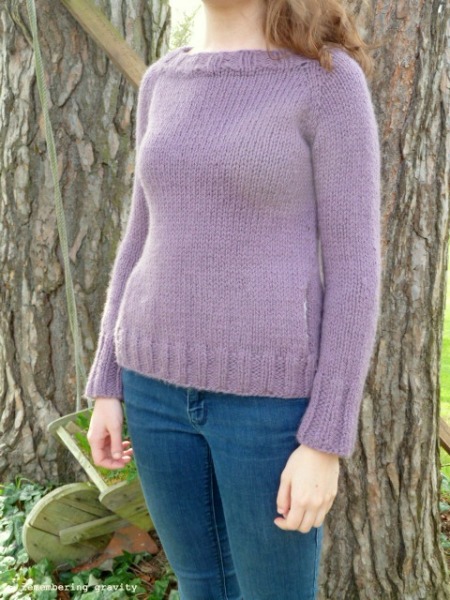 END_OF_DOCUMENT_TOKEN_TO_BE_REPLACED

… a man with three… Oh, no, hang on. Something that I finished in the last week. Instead of the usual “here’s what I finished a few months ago…” malarkey, this jumper literally came off my needles last Tuesday, and went straight down onto the cork boards for blocking. END_OF_DOCUMENT_TOKEN_TO_BE_REPLACED 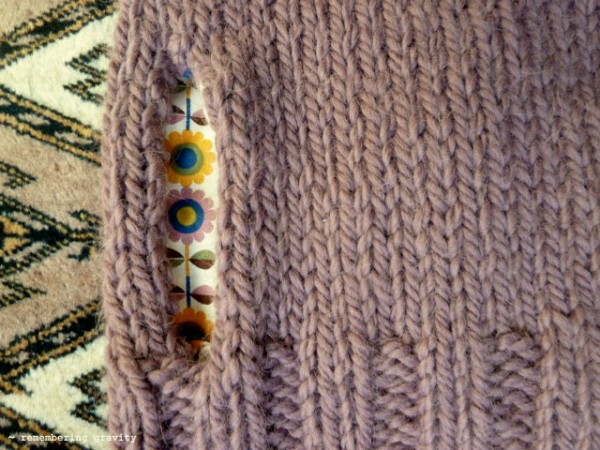 This was meant to be a joint post about Christmas jumpers with the post about Guston, but unfortunately I forgot to get pictures of my sister wearing it, and my subsequent requests for pictures… well, blood and stones don’t come close, so here is the post sans modelled photo. The jumper is another Agnes, also in Drops Nepal wool, like the one I made for myself, this time in Old Pink, which I love. It’s not quite as boxy as mine, because I made some mods to the original pattern to make it a bit looser-fitting for me. END_OF_DOCUMENT_TOKEN_TO_BE_REPLACED 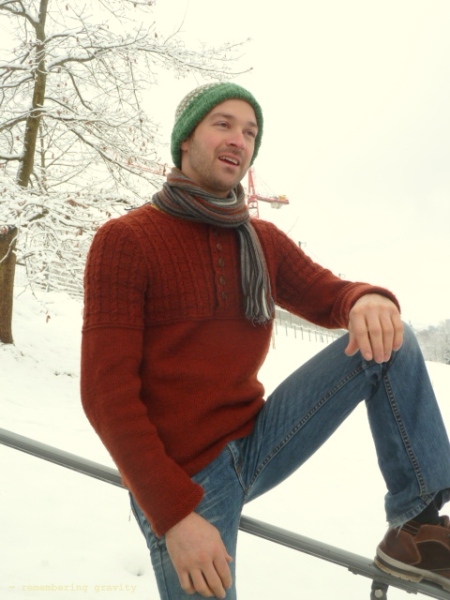 Here are a couple of jumpers that were finished around Christmastime. The first is Guston by Anne Budd, which was intended to be for The Boy’s birthday, and officially it was, but it didn’t make it off the needles until shortly before Christmas. The cold season here has only really started since I’ve been back after Christmas anyway, so no harm done. END_OF_DOCUMENT_TOKEN_TO_BE_REPLACED 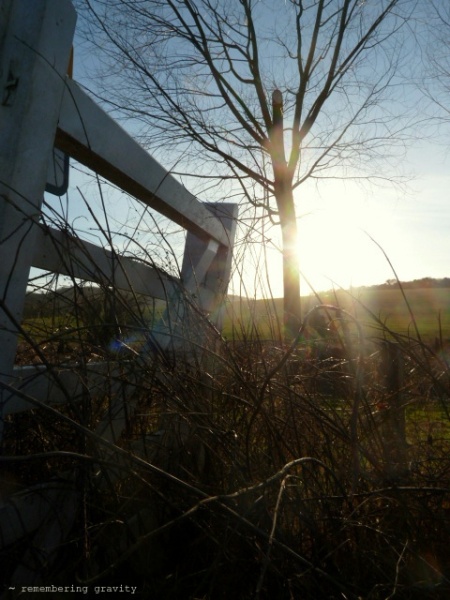 A short interlude in England. Just four days. For a family occasion, as someone said to me, these days we all seem to meet up only for weddings and funerals. Unfortunately this was the latter, but keeping up with family is always a pleasure.

In amongst the preparations and faffing, we all managed to get out for a walk in the Sunday afternoon sun. At this time of year, afternoon sunlight (if you can get it) is lovely and hazy, wonderful for taking photos. END_OF_DOCUMENT_TOKEN_TO_BE_REPLACED

Ugh, things have piled up again in the last week, and so my backlog-clearing attempt hasn’t gained much ground. I climbed more in the past seven days than I did in the middle 6-8 months of 2014, and I’m pushing myself to improve my level, rather than just staying happily at the same level that I am after a six-month no-climbing hiatus due to the terrible summer that we experienced over here (it’s not just you, Britain!) 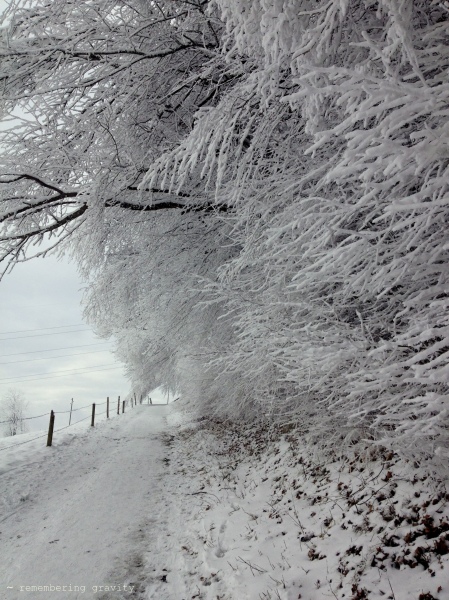 Unlike in England, where as soon as Christmas is over we start to think about spring, and eventually summer (and all those long, balmy, imaginary summer evenings) in Switzerland, Christmas is just the start of the winter, and the skiing season. In fact there is an official school holiday which roughly coincides with the spring half-term holiday, that is actually called the skiferien, or skiing holiday.

At the weekend I made another attempt at learning to ski, which went a lot better than the first round a couple of years ago. This time we managed to find a hill with a manageable slope, and without family onlookers, come to watch the ausländer END_OF_DOCUMENT_TOKEN_TO_BE_REPLACED

Ok, here’s the first of my attempts to clear the backlog of blogging that built up towards the end of 2014. In no particular order. Certainly not chronological. 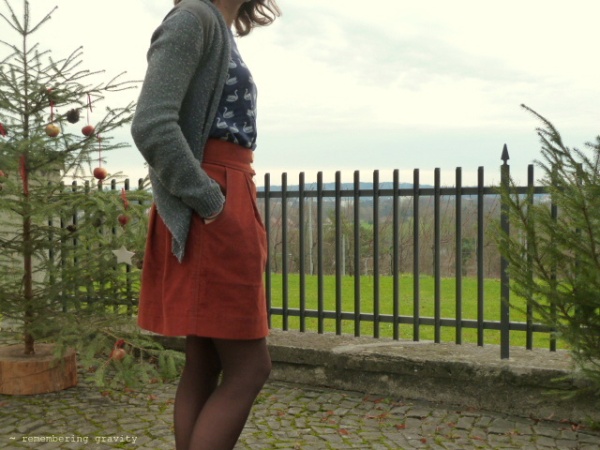 I don’t wear skirts all that often. They’re not hugely practical for my work, and the rest of the time I tend to just throw on a pair of jeans without really thinking about it. But I do like skirts, when I remember them, and when I found some corduroy in a gorgeous rusty / russety colour on the reduced stand of the fabric section in Karstadt, in that town-just-over-the-border-where-I-certainly-don’t-go-to-take-advantage-of-the-cheaper-prices, I sort of knew that a nice warm autumn/winter skirt was on the cards. END_OF_DOCUMENT_TOKEN_TO_BE_REPLACED 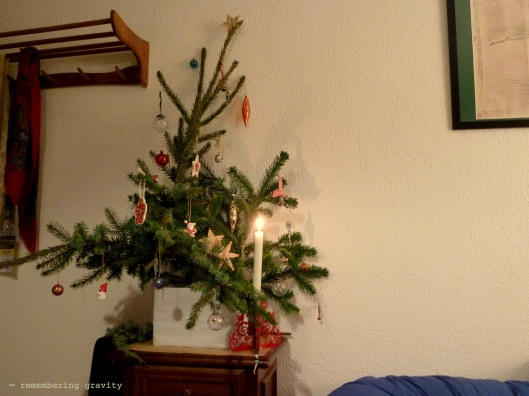 One of my least favourite things about it is that, in the outside world, it seems to start immediately after Halloween, and by the time the actual day arrives, you’re sick to the back teeth of the cheesy music and decorations.
When we were growing up, and still now in fact (our parents would dispute whether we ever actually grew up, and we would possibly dispute whether they had either,) our family put up the Christmas tree on Christmas Eve. The warm sparkly Christmas feelings started the day before Christmas, and lasted until END_OF_DOCUMENT_TOKEN_TO_BE_REPLACED

There is nothing to get the Christmas feeling going like the smell of mulled wine (or, the German Glühwein which sounds rather less appetising to my English ears!) Christmas music, yes, that works too, and a wander round a Christmas market in the freezing cold (with regular mulled wine breaks to warm up.) 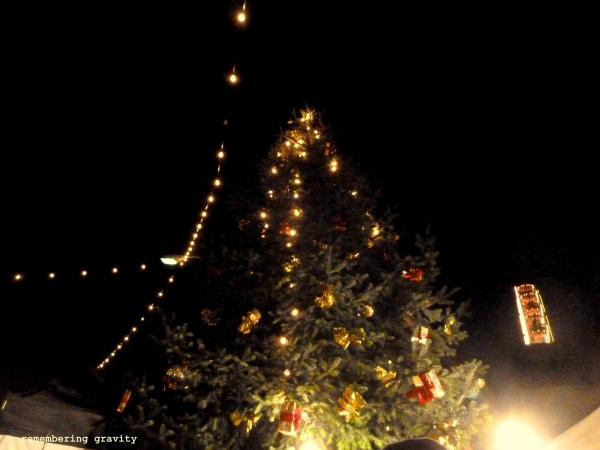 I was first introduced to Christmas markets only a few years ago, when I visited a friend on the Franco-German border during “(tis) the season”. END_OF_DOCUMENT_TOKEN_TO_BE_REPLACED